Meepo is a mobility utility blue hero whose main advantage is the presence of many clones and the presence of periodic active damage abilities (Poof) that allow these clones to move around lines and deal AoE damage. Meepo initially starts out alone, however his signature card Divided We Stand allows him to summon clones, enabling his abilities.

Clones are both independent in the choice of items on them and dependent on the death of one of the clones. If one clone dies, then all Meepos die on all lanes.

The reward for killing a Meepo is 5

* the number of clones .

Meepo has synergy with teleportation items and abilities.

Meepo on the battlefield should try to avoid any damage: whether physical or magical. With a small amount of health, even in the presence of armor, it is a vulnerable target for piercing damage attacks and spells, whether on one target or AoE.

Cleave damage can be considered as a dangerous modifier, which allows unit to inflict damage on the Meepo even if the direction of the main attack is not directed at it.

Lane improvements to armor like Verdant Refuge allow you to reduce or avoid incoming attacks and spells with Normal Damage type.

Having a Meepo in the deck requires the player to use 3 copies of his signature ability in this deck .

Since the size of the deck may vary, it is necessary to estimate the probability of receiving a Divided We Stand to a particular turn depending on the total size of the deck.

In general, a task can be reduced to the following: there is some set of cards of interest to the player (say, a player wants to get one copy of a card for a certain turn).

These probabilities are given for a set of one to five cards (сlick on the image to open the data table).

In accordance with the above data, the probability of getting Divided We Stand (it is a 3 card set) up to 2 turns for deck with 40 cards is 44.78 %. Thus, it can be stated that since this spell is key to winning, if there is a Meepo in the team, it is desirable to have as few cards as possible in the deck. For a varied deck with 60 cards, the chance of getting a Devided We Stand is 46.16% on turn 4.

Due to the vulnerability of the hero, the player must make decisions on placing the Meepo extremely carefully.

For better clarity, we will present the lane as the following notation

, where xi is any unit of the top player on this lane (i = 1, ..., n where n is the number of top player units in this lane) and yj is any unit of the bottom player on this lane ( j = 1, ..., k where k is the number of bottom player units in this lane), the sign " - " means the absence of a unit on one of m possible positions. We also keep in mind the ordinal numbers of positions from 1 to m: so the leftmost position has the index 1, and the rightmost one has the m. The maximum number of units that fit within the screen without having to move is 8 so if the lane is less than 8 units on one side, we use notation with 8 positions (or notation with 7 positions as will be shown later): 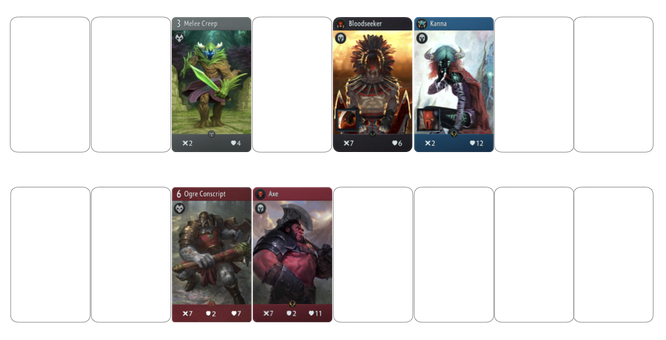 If we mentally draw an axis through the center of the board on the lane, then two situations can come out: 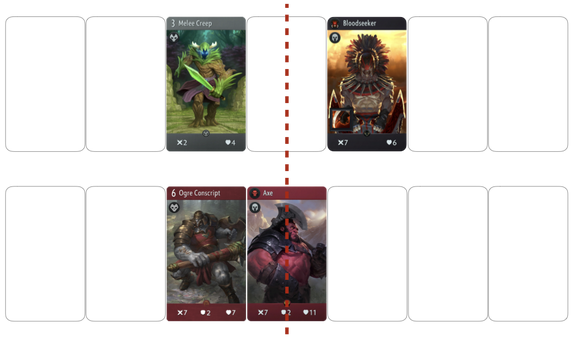 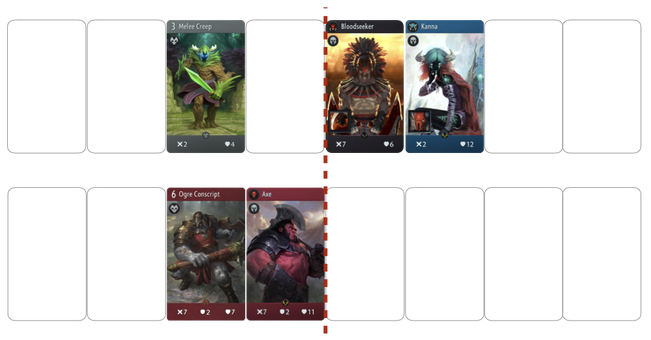 In this scenario if top player need to deploy Meepo on this lane, then the only possible position for him would be with the index 5. And then the hero is threatened with an attack from y3. Both players have dense sides of lanes, but the bottom player has a more complete lane with greater lane width. If he tries to deploy a Meepo on this lane, then he may take positions with indexes 2 or 6. On the first position Meepo has no threats, and on the second there are no threats.

In general, the player must be well aware of all deployment cases on the lane.

Slot is a space intended for unit placement no matter if there is a specific unit on that space or not. Speaking of slots arranged against each other on the lane, we mean a pair of slots or box.

Where are three main types of boxes which we conditionally call:

To properly understand the deployment slot, you need to take into account the current lane's box types (or else the lane side occupancy), lane width and its change associated with the deploy of new units on the battlefield.

The deployment position of the unit on the lane is determined based on the following:

For example, consider the following location of units on the lane before deployment:

Suppose both players deploy two units on this lane: x3, x4, y2, y3. The lane width is 3 before deployment. On the upper lane, we get the value of TS equal to 4 (2 units on the lane + 2 units will deploy). On the bottom lane, the value BS is 3 (1 unit currently on the lane + 2 units will deploy). Comparing them, we find that TS is larger then BS and TS is larger than the current lane width. That is, the lane will shift as its length has changed from 3 to 4 units (the notation also changes from odd to even).

We will not consider all possible options for the placement of units x3, x4, y2, y3 between the deployment slots, but suppose that units is placed from left to right and along the left border. There are only two possibilities to shift: one unit to the right or left.

For a better assessment of the possibility of taking damage, player should know the probabilities of attacked units and taking damage from units in standard situations.

By default, a unit has the following probabilities of attacking, if in front of it all slots are empty or with the above terminology it is in the unblocking box (for more details see Pathing): 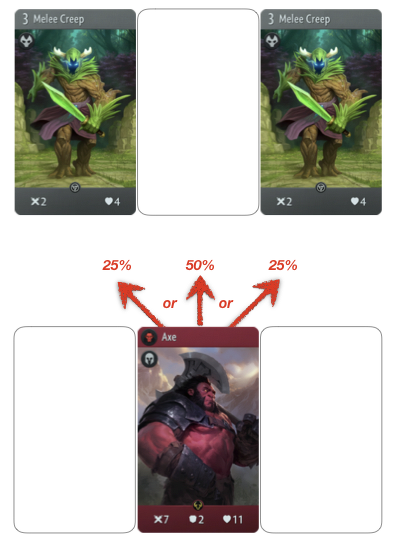 This is looks as follows: one of four possible Pathing Cards (the card "forward" has a probability of twice as much as each of the side ("left" and "right") cards) is placed before the unit (see Details)

These probabilities change in the following situations:

Next, we calculate the probability of being attacked by two units at the same time. Since events are independent we have the following probability:

This is followed by the case when a unit can be attacked by either one unit, or another, or two of them simultaneously. Calculate the sum of probabilities of events.

Now when we can calculate the probability of receiving damage on each of the positions, consider the following examples.

1. This lane is proposed to deploy Meepo. Consider the total opportunity to receive lethal damage on lane (here it is assumed only the main damage already available to the units and cases are not considered when it is necessary to avoid deploying to the lane on which the opponent has a black hero or a red hero for example). The probability of being deployed in a particular slot and getting lethal damage P(LD^S) is equal to the product of the probability of being deployed on a certain slot P(S) and getting lethal damage, provided that it was deployed on this slot P(LD|S) (see conditional probability).

2. Consider another example when creeps deploys on the lane with Meepo.

Thus, the lane given in this example is much more dangerous from the point of view of receiving lethal damage than the one given in example 1.

3. Let us consider the third lane where, on one side, Meepo and creep, and on the other side, creep and Phantom Assassin are deployed. As it is possible to judge from the rules of deployment on the lane, two new slots for deployment are formed on it.

But how to calculate the probability in the case of the emergence of new slots for deployment?

In the case when the new deployment slot appears on the left see Details.

In the case when the new deployment slot appears on the right see Details.

In most cases, you should be guided when deploying Meepo (or another hero) the above calculations: minimizing the possibility of receiving lethal damage.

But in a number of game situations, you must also take into account the initiative and color of your opponent’s heroes on the lane to avoid the possibility of receiving this or that damage.

One of the Meepo's strengths is the ability to inflict damage on any of the lanes and before the action phase on lane (also used the term "cross lane"). This has only a number of heroes, spells, improvements. Among others it is possible to name such cards as Heartstopper Aura (It dealt damage before the action phase), Grazing Shot (dealt damage on any lane), Steam Cannon. The damage from the Poof is also applied to the area. The course of the battle rushes from the left to the right lane, but if you place the Meepo with the Blink Dagger on the central or right lane, you can then dealt damage on the left lane by applying the item and then Poof another clones to it (this is the possibility of causing damage to any point on the map).

Consider a number of examples.

Example 1. On the Top (leftmost) lane opponent have Phantom Assassin and now turn 4 (6 mana turn). On turn 2 you used the ability Divided We Stand and both Meepo died on combat phase. On turn 4 they are ready to be deploy again.

Suppose also that the enemy has the initiative on the Top lane. If you place a Meepo on the Top lane, then the opponent can immediately use the Coup de Grace. If, however, they are placed on other lanes under the assumption that the enemy will not have heal to the Phantom Assassin, then it will be possible to use the blink and poof to the first lane and killed Phantom Assassin. Black heroes, as the most dangerous for Meepo, have other abilities, for example, a Gank, which in this situation will nullify our placement efforts, but we consider the general idea of ​​avoiding damage on one of the lanes and then applying it in the opposite direction of the battle on the lanes (right to left).

In general, it does not matter how the Meepos is deployed on the center lane, however, let us assume that the placement happened as follows:

Our actions on the Center lane will consist of the following:

Example2. Consider the following case of placement on the lane. As you can see Meepo dies after the combat phase. But Meepo can move to a more advantageous position after an unsuccessful deployment by applying a Poof on himself. After applying the Poof, Meepo disappears from the lane and then appears at the position available for deployment including the one with which it has performed the Poof.

Meepo then moves to one of the possible free deployment positions and simultaneously deal damage from the Poof. When moving to the previous position, it will still die, but when redeploying to a new one, it will remain alive.

In some situations, if one of the Meepo is threatened on the lane, the sequence of Poofs is important for redeploy. That is, the order in which the Poofs are performed is important.

Black heroes and spells are potentially one of the most dangerous threats to Meepo, because black spells can act on any position on the lane, and a number even on any position on another lane. Therefore, the Meepo advantages in mobility are completely non-leveled.