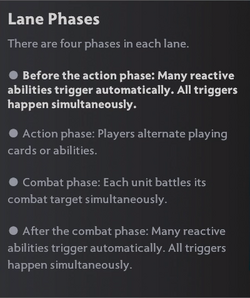 A short summary of the phase system

Each round of gameplay of Artifact takes place across multiple phases: the Deployment Phase, followed by the Lane Phase for each of the three lanes in turn, followed by the Shopping Phase and finally the End Phase.

During the Deployment Phase, each player has two creeps randomly assigned to lanes. Then, both players secretly assign lanes for each of their heroes that are ready to be deployed. Heroes that die must sit out one deployment phase and then are ready the next deployment afterwards; heroes who return to the fountain without dying or have Rapid Deployment are ready on the very next deployment phase. On the second round of the game, the player's 4th hero becomes ready for deployment, and on the third round of the game, their 5th hero becomes ready for deployment.

After all choices are confirmed, each player draws two cards, and newly-deployed heroes and creeps are placed into random combat positions in the lanes they were assigned to. Players can also see how many items their opponent bought during the shopping phase, and how much gold they spent.

(Note: The very first Deployment Phase of the game is different: three melee creeps are deployed instead of two, the players' first three heroes are each assigned to a random lane, and players start with 5 cards)

Reactive abilities that say "Before the action phase..." trigger in this phase. All abilities trigger simultaneously. No player actions can be taken. Also colloquially known as the "upkeep phase".

During the Action Phase, the players alternate performing an action. An action is either to play a card; activate an activated ability of a unit, item, or improvement; or to pass. The Action Phase ends when both players pass consecutively.

Spell and creep cards can only be played if there is an allied hero of that color in the active lane. Item cards and activated abilities can always be played.

During the Combat Phase - all heroes and creeps that can attack do so simultaneously. Health Regeneration resolves at the same time as combat damage.

Reactive abilities that say "After the combat phase..." trigger in this phase. All abilities trigger simultaneously. No player actions can be taken.

During the Shopping Phase, each player can spend gold at the Shop. The Shop offers, in this order, a random "Secret Shop" item, an item from your Item Deck, and a consumable item. Once both players elect to finish (or "pass") shopping, the phase ends.

Once all of the other phases have finished, the round ends. Both player's maximum mana pools increase by one for all of their towers. All mana pools get restored to full. Effects that last "until end of round" wear off simultaneously.

Players are timed with a chess style turn timer. Both players start with a pool of time that is expended across the entire match while they are able to act. Players have at most one minute to complete an action, before the turn automatically passes. Both timers gain an additional 2 minutes upon the end of the third lane. If you run out of time, you lose.