Edit
watch 01:36
We're Getting Mutants in the MCU - The Loop
Do you like this video?
Play Sound
Hero
Responses
Strategy

Bringer of the Faithful
Passive Ability
Summon a Melee Creep into Prellex's lane each deployment phase. 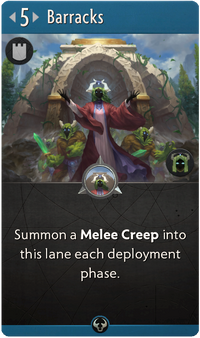 ▶️Brothers and sisters, The Ancient is coming. With every passing day my visions grow stronger: A violet sky. A sundered moon. And an Ancient voice that whispers 'Prepare for my arrival.' Prepare. Such a simple word that does no justice to the work that lies before us... We must be heralds; walking testimonies to the benevolence of The Ancient. Spreading the word of its glorious arrival, no matter if that message is received with joy or scorn. We must be architects; building not just this monastery for those who believe what I have seen, but an entire world that is worthy of the Ancient's splendor. We must be zealots; willing to lay down our lives in defense of this sacred space, because rest assured we are at war. Kanna and her heretics will stop at nothing to undo the work that we've accomplished, and that is why we must return in kind.
— Prellex, Priestess of the Radiant