Prellex is a utility hero in Artifact. Her specialty is to overwhelm the enemy by spawning creeps in particular lanes, blocking the enemy from dealing damage to towers and ancients, and in some case, newly deployed heroes.

Blue hero, she specialize in board control. 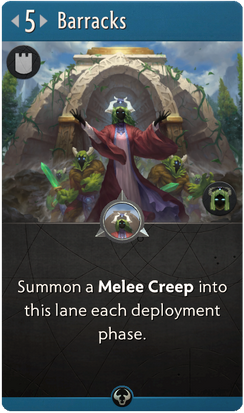 Green cards, since Green cards can prevent her from taking damage, allow her to heal or buff her creeps. If she is played with a

Black deck, she must be paired with gold-generating abilities since no Black card can directly protect her.

Cards that allow her to change lane or position, absorb damage or reduce the enemy attack help her to stay alive if she is targeted.

Since she can spawn additional creeps, creep-buffing abilities can make her strategy stronger.

Since Prellex has one of the weakest body in the game, it is advised to not play her as one of the first heroes on the board. She also doesn't spawn a Melee Creeps with her on the first round if used as one of the three first-round heroes.

On the board, Prellex works well with creeps or heroes who can protect her by taking hits, heal her, or give her armor. She can also be placed in lanes that are already full, making her hard or impossible to hit. She works best in lanes that are contested by an inferior number of units with strong enemies.

Prellex is a stronger hero mid to late game since she can completely deny the enemy units from reaching the tower every turn. The longer a game last, the more difficult it is to bypass Prellex's creeps. Since they spawn ad infinitum, Prellex's creeps have to be constantly taken down in order to not get overwhelmed by them.

Once equipped with items, Prellex can survive most attacks and kill basic creeps by herself, allowing her to trigger her passive ability more easily.

Although weak against decks composed with high attack heroes at the start of a match, she tends to be effective at blocking them later on.

Since Prellex strategy needs time to develop, she is weaker against deck that are able to pressure her towers very quickly in early game (typically composed of

Since Prellex's signature card is by far her strongest attribute, decks built around countering will have a higher chance to defeat her.